Susan Merrill grew up on a farm in rural Maryland. She was graduated from Garrison Forest School, earned a B.A. from Bennington College, attended l’Accademia delle Belle Arti in Rome, Italy, and acquired an M.A.T. from the University of Massachusetts at Amherst. She was the Lower School Art Teacher for many years at Berkshire Country Day School in Lenox, Massachusetts, and is primarily known as a painter of simple everyday scenes, people, and animals.

She has exhibited her work in many local venues in the Berkshires over the years.

For the past five years she has had a solo show of paintings of farm animals at the Hancock Shaker Village for the month of April, in conjunction with the Baby Animals event which starts the summer season. In 2009 All Creatures Gathered Here (a Shaker quote) featured baby animals, as did the 2010 show, More Creatures Gathered Here. In 2011, The Black-and-White Barnyard focused on animals whose black-and-white coats take color from shadow and other atmospheric circumstance. 2012’s show, Families,Flocks, and Herds, was mostly about animals in groups and the patterns they form as a result.

In addition, in 2009, she shared with Suzette Alsop a large show of domestic scenes, called The View from Home, at the Welles Gallery in Lenox, Mass. In 2009, 2010, and 2011 she participated in small group shows inspired by water and Lake Mahkeenac, at the Mahkeenac Boating Club in Lenox, Massachusetts.

In general, she has preferred to display her art where the people who should see it will be likely to go, rather than in art galleries, which can seem distancing to the average non-artist. 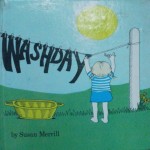 I LIVE IN STOCKBRIDGE, a child’s history of the town of Stockbridge, written by Susan Geller, and illustrated and hand-lettered by Susan Merrill, in 1976, has just been updated and re-printed for 2012.

WASHDAY, written and illustrated by Susan Merrill, and published by Clarion Books, a division of the Seabury Press, in 1979, was designed for young children.

WARM MORNING, written and illustrated by Susan Merrill in 2011, is a 315-page novel about a young girl growing up in a magic house on a Maryland farm.

Susan Merrill has had many local readings and book-signings, including at the Bookstore in Lenox, Mass., Ventfort Hall in Lenox, Mass, and Berkshire Women Writers at the Unicorn Theater in Stockbridge, Mass. Part of the series Stories for a Winter Afternoon, at the Unicorn Theater, she also read for many years as part of a series of Stories on Sundays at the Williamsville Inn in Williamsville, Mass. In addition she has read at numerous private events, from the Round Table at the Lenox Club to the Lenox Garden Club.

WARM MORNING will have its first book-signing and reading in its natural habitat, Maryland, in September 2012 at the Ivy Bookshop in Baltimore, Maryland.

Susan Merrill lives with her husband, the set and production designer, Carl Sprague, in Stockbridge, Mass. She has three children, Daisy Rockwell, also a painter; Ruslan Sprague, a ballet dancer with Ballet West in Utah; and Elena Sprague, a student.